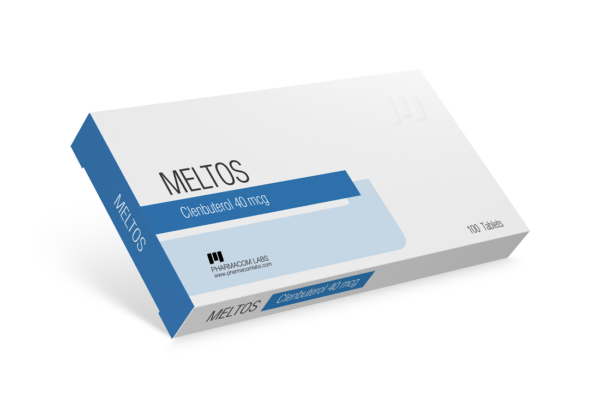 Meltos (active agent - Clenbuterol) is not an anabolic steroid, but rather a stimulant which belongs to a classification of compounds known as sympathomimetics. Originally, Clenbuterol was (and still is) used as a bronchodilator in the treatment of asthma. By activating beta-2 receptors in the cell wall of the bronchi, it triggers the dilation of the bronchi (the opening and expansion of the airways) in the lungs, nose and throat.

In bodybuilding, Clenbuterol is most often used in cutting, pre-competition, and fat loss cycles. Clenbuterol can bind to receptors in fat cells and trigger lipolysis. This effect involves its interaction with beta-2 adreno-receptors in adipose tissue.

It is important to note that with regular and continued use, Clenbuterol will down-regulate beta-2 receptors in the body in response to its stimulation of these receptors, and this happens very quickly. The manifestation of this effect is a decrease in fat loss during use until fat loss stops completely. There are two methods to remedy this effect. The first is to stop using the drug for at least 2 weeks. The second is to use Ketotifen, an antihistamine drug known to upregulate beta-2 receptors.

Clenbuterol is not an anabolic steroid, nor does it express or exhibit any of the known side effects that are associated with the use of anabolic steroids. Instead, Clenbuterol expresses side effects that are common to all drugs and compounds in the stimulant class. Perhaps the most unique of the side effects of Clenbuterol are the frequently reported muscle cramps. The cause is the depletion of taurine in the body from Clenbuterol. Taurine, like magnesium, potassium, and sodium, plays a crucial role in the regulation of impulses and bioelectric nerve signals that govern the contraction and relaxation of all types of muscle tissue. When taurine is depleted, it can result in involuntary muscle contractions, often intense and painful, which lead to cramps. Taurine supplementation at a rate of 2.5 to 5 grams per day may alleviate this side effect.

Clenbuterol can have a negative effect on the cardiovascular system and increase heart rate and blood pressure. Please take this into account before using it.

Other common side effects of Clenbuterol are tremors, sleeplessness, sweating, and nausea.

In order to achieve significant fat loss, the maximum dose of сlenbuterol should not exceed 120 to 160 mcg per day (for men).

WARNING: The dose should be increased slowly to the maximum doses mentioned. The initial dose should not exceed 20-40 mcg during the first 2-4 days, after which the dose of Clenbuterol is increased by an additional 20 mcg and so on. It is not necessary to decrease the dose to stop using Clenbuterol.

Filter
Found 5
Confirm
In order to add products to a wish list, You need